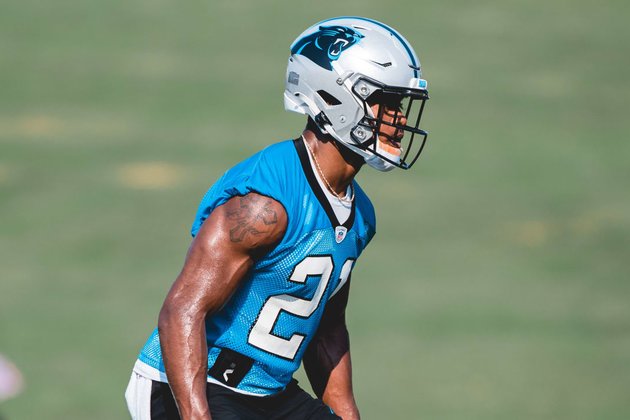 SPARTANBURG - The Panthers found out last year that Jeremy Chinn gives them options.

It didn't take long for him to show them what the latest experiment could look like.

On the first snap of a 7-on-7 period, Chinn picked off a Sam Darnold pass after it bounced off the hands of DJ Moore, and took into open space in a manner that suggested no one was catching him.

It's the kind of sudden-change play he's made before (like his two-touchdown-in-12-seconds outburst in Minnesota), and the kind they hope he can bring to the secondary this year. They're not committing to calling it a position switch, because they still plan to move him around. And he was good enough at linebacker that it's worth considering using him there at times as well.

While he wasn't practicing during OTAs as he recovered from an offseason knee procedure, he spent his time with defensive passing game coordinator Jason Simmons and the safeties, working through the mental aspect of playing his old college position.

"You're taking him away from the line of scrimmage, where he made a lot of plays, but he also has a chance to affect our pass defense maybe a little more," Panthers head coach Matt Rhule said. "He did some of it last year. I think between Jason Simmons and (defensive coordinator Phil) Snow, they'll be creative enough to utilize his skill set.

"We're going to play him there for a while and see if it's natural to him. The only negative of the spring was we didn't get a chance to do it with him. But we'll put him back there and see if he's the best fit. But I think right now we feel good about the plan of trying him back there, letting him affect our pass defense a little more, and then we can move him up by call or by game plan."

Simmons said this offseason that when he was scouting Chinn at Southern Illinois, he thought he had the best ball skills of any safety in his draft class. And two practices into this year's training camp, Chinn's already showing signs that was an accurate evaluation.

- There's always a little danger this early in camp putting too much stock into any individual play.

But as the Panthers did a little more than they did on the first day, there were still a number of individual highlights.

Moore climbed the ladder to make an incredible catch over Donte Jackson in one-on-ones, making the kind of athletic play he's showed so often last year when he was third in the league in yards per reception.

Also, rookie cornerback Keith Taylor broke up a deep pass down the sideline, showing good range for a player his size.

- Yes, if you were watching practice Thursday, you saw Taylor Moton take some snaps at left tackle.

He's still taking most of his work on the right side, but they're going to give him a little work on the left in case he needs to move. Rhule said not to read too much into Moton's position, or anyone else's, until they're at least in pads.

"Right now we're just trying to build our team. I don't really pay attention to first-team, second-team," Rhule said. "Right now if you watch our offensive line, guys rotate. To me, it's about getting guys on tape. If all you do is play with the first-team offense vs. the first-team defense, and the next guy plays second-team offense against the second-team defense, you never get a chance to see different guys against different people.

"Take a two and put him with the ones, and let him go against the better player. We're always trying to move guys around, rotate guys around, especially early in training camp."

Trent Scott (who started four games at left tackle last year) has worked at both tackle spots, Dennis Daley has taken snaps at tackle and guard on either side, and you could run down the list.

One of the intriguing combinations of guys they rolled through Thursday included Deonte Brown at right guard with a collection of starters, as they see if the massive rookie is ready.

And for what it's worth, Brown was the first guy on the practice field Thursday, which is never a bad impression to make when you're trying to create a role for yourself.

- Speaking of showing up early, tight end Ian Thomas was out catching passes from the Jugs machine well before the start of practice again. He did the same thing Wednesday, as he works to keep from being left behind new addition Dan Arnold.

- Wide receiver Robby Anderson wasn't at practice Thursday morning, with what was described as an illness. Rhule said the training staff made the decision to keep him inside.

- They did have linebacker Frankie Luvu back on the field. He was placed on the reserve/COVID-19 list on Tuesday.

Vaccinated players can return to work after producing two negative tests, 24 hours apart. So while Luvu hasn't been officially activated yet, the fact he has progressed to being on the field and working on the side is a reasonably clear indication that he's headed in that direction soon.