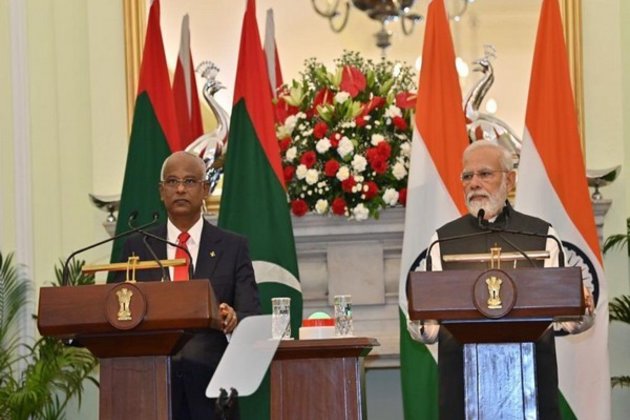 New Delhi [India], August 2 (ANI): Prime Minister Narendra Modi on Tuesday underlined that Maldives occupies a special place in the hearts of Indians and also in the country's "Neighbourhood First" policy as he reaffirmed strong ties with the island nation in a range of fields.

Modi made these remarks during Maldivian President Ibrahim Mohamed Solih's visit to India. This was Solih's third visit to India since assuming office on November 17, 2018.

During the visit, Solih had restricted and delegation-level talks with PM Modi during which the two leaders expressed satisfaction at the rapid expansion of the bilateral partnership in recent years. The two leaders reiterated their commitment to further strengthen and deepen the ties.

"The India-Maldives bilateral partnership is underpinned by geographical proximity, historical, cultural ties and shared values. Prime Minister Modi underlined that the Maldives occupies a special place in the hearts of Indians and in India's 'Neighbourhood First' policy. President Solih reaffirmed his government's 'India-First Policy," the MEA said in a statement.

President Solih thanked Prime Minister Modi and for standing by Maldives during the Covid-19 pandemic. The medical and financial assistance from India helped the Maldives overcome the health and economic fallouts of the pandemic.

Both leaders agreed to further deepen institutional linkages for cooperation in the areas of defence and security, investment promotion, human resource development, infrastructure development including climate and energyThey welcomed the growth in people-to-people ties through implementation of visa-free travel, better air connectivity, exchange programmes, and growing cultural and economic linkages. India has emerged as the top source of visitors for the Maldivian tourism market, contributing to its economic resilience.

The leaders acknowledged the role of the bilateral air travel bubble, created during the pandemic, in the expansion of tourism ties. The two leaders welcomed the ongoing work to operationalize the usage of Rupay Cards in Maldives and agreed to consider further measures to boost bilateral travel and tourism and economic inter-linkages.

Both leaders also acknowledged the valuable contribution of Indian teachers, nurses, medical workers, doctors, workers, and professionals in the Maldives. They welcomed the recent launch of National Knowledge Network in Maldives and directed the officials to work towards expanding its reach.

The two leaders welcomed the engagement among business leaders from both countries during the visit, noting that fisheries, infrastructure, renewable energy, tourism, health, and IT among others were key sectors for greater economic linkages between the two countries through cross-border investments and partnerships.

Both leaders acknowledged India's potential as a frontier market for Maldivian tuna products under the SAFTA.

According to the MEA statement, India-Maldives development partnership has witnessed rapid growth in recent years and covers large infrastructure projects, community-level grant projects and capacity building programmes which are based purely on requirements of the Maldives, implemented through transparent processes and in a spirit of cooperation between the two Governments.

Both leaders participated in the virtual "pouring of the first concrete" ceremony of the USD 500 mn Greater Male' Connectivity Project being built under grant and concessional loan support from India. The two leaders directed the officials to ensure timely completion of this largest landmark infrastructure project in Maldives - that will enhance mobility between Male', Villingili, Gulhifalhu and Thilafushi islands, cut down logistics cost and drive people-centric economic growth- which will be a symbol of enduring friendship between the two countries.

Prime Minister Modi announced offer of a new Government of India Line of Credit of USD 100 million to finance infrastructure projects in Maldives. President Solih thanked Government of India for this offer and expressed confidence that this additional fund would enable implementation of several large infrastructure projects that have been under various stages of discussion.

Both leaders reviewed the progress achieved in the development of the 4,000 social housing units being built in Greater Male under Buyer's Credit financing of Exim Bank of India. These housing units are in line with the Government of Maldives' focus of providing affordable housing for its citizens.

The two leaders welcomed the approval of Exim Bank of India Buyer's Credit funding of USD 119 mn for construction of another 2000 social housing units in Greater Male and exchange of a Letter of Intent to this effect between Exim Bank of India and the Government of Maldives. President Solih expressed appreciation to the Government of India for the generous assistance for additional housing units.

The two leaders expressed satisfaction at the progress achieved in other Indian funded projects including the Addu Roads project, provision of water and sewerage facilities at 34 islands, and restoration of Hukuru Miskiy (Friday Mosque). The two leaders welcomed the approval of the revised DPR of the Gulhifalhu Port Project and directed officials to commence implementation at the earliest as it will provide world class port facility for Greater Male' replacing the existing port and relocation of facilities from Male' City.

The two leaders also welcomed final approval of the Indian side for signing of the Hanimaadhoo Airport Development project EPC contract and expressed happiness that implementation would commence shortly. The two leaders noted with satisfaction the finalisation of the feasibility report of the Cancer Hospital building project in Laamu and its financial closure through the Government of India Line of Credit. Both leaders welcomed the positive contribution to island communities from the 45 Community Development Projects, being implemented through grant assistance from India.

Prime Minister Modi and President Solih noted with satisfaction that capacity building and training had emerged as a key pillar of the bilateral partnership in the past few years. Alongside ITEC training scheme, hundreds of Maldivians undergo special customized training in India, facilitated by institutional linkages between civil services, customs services, parliaments, judiciaries, media, health and education institutes, and defence and security organisations.

The two leaders welcomed the MoU signed between the Local Government Authority of Maldives and the National Institute for Rural Development and Panchayati Raj of India which would strengthen the capacities of local government institutions in the Maldives. (ANI)