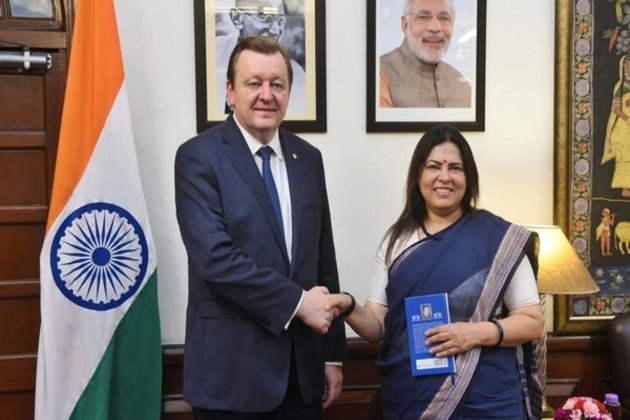 In a tweet, Lekhi wrote, "Glad to meet H.E. Sergei Aleinik, First Deputy Foreign Minister of the Republic of Belarus within the framework of his visit to India for Foreign Office Consultations. Noted bilateral cooperation in various spheres and exchanged views on the situation in the region."The meeting comes as India and Belarus Wednesday held the seventh round of Foreign Office Consultations (FoC) in New Delhi where both sides reviewed the entire gamut of bilateral relations.

During the FoC, both the nations reviewed the entire gamut of bilateral relations, including political, economic, cultural, tourism, education and consular matters. The two sides also exchanged views on regional and global issues of mutual interest, read the Ministry of External Affairs press release.

It was agreed to hold the next round of consultations at a mutually convenient time.

Recently, India congratulated Belarus for celebrating its 78 years of Independence on July 3rd 2022. India's relations with Belarus have been traditionally warm and cordial. India was one of the first countries to recognize Belarus as an independent country in 1991 after the break-up of the Soviet Union.

The cooperation between the two countries is visible at many multilateral fora such as UN Security Council (UNSC) and the Nuclear Suppliers Group (NSG). Belarus was one of the countries whose support helped in consolidating India's candidature for the non-permanent seat at the UNSC in July 2020.

India has also reciprocated Belarus's support at various international fora, such as Belarus's membership in the Non-Aligned Movement (NAM) and other international and multilateral groups like IPU (Inter-Parliamentary Union).

The two countries have signed a number of Agreements/MoUs on various subjects, including trade and economic cooperation, culture, education, media and sports, tourism, sciencetechnology, agriculture, textiles, Avoidance of Double Taxation, Promotion and Protection of Investments, and defence and technical cooperation.

In the economic sector, the annual bilateral trade turnover in 2019 stands at USD 569.6 million. India's special gesture in 2015 that granted Belarus the Market Economy Status and a USD 100 million Line of Credit has also helped in the growth in the economic sector.

Market Economy status is a status conferred on the country exporting the goods accepted as the benchmark. Prior to this status, the country is considered a Non-Market Economy (NME). India's encouragement to the Belarusian businessmen to invest in 'Make in India' projects is bearing fruits.

Many young Belarusians also take a keen interest in learning Hindi and dance forms of India. Taking into account the gradual shift of the global geopolitical and geo-economic centre of gravity to Asia, cooperation with India creates additional opportunities for international trade and investment.

Belarus needs several footholds in Asia diversified by geographical subregions. India could become one of such pillars in South Asia, but Belarusian initiatives should definitely fall into the "matrix" of India's national interests and sacred meanings.There are also certain hidden reserves for cooperation in the field of cybersecurity. Belarus may become an "entry point" for Indian pharmaceutical companies to the Eurasian market.

The potential of military and technical cooperation, including shared developments, has not been fully disclosed. Cinema (Bollywood) could stimulate the interest of the Indian business community and tourists. An additional increase in the export of tourism and medical services could be ensured by recreational centres being established in Belarus based on Indian traditional medicine models (Ayurveda Yoga). (ANI)