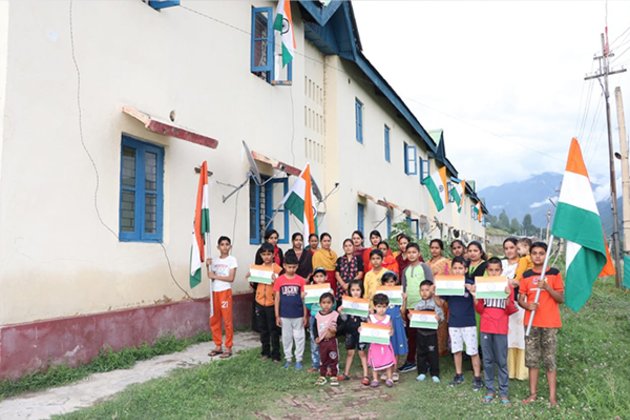 Pulwama (Jammu and Kashmir) [India] August 4 (ANI): The 'Har Ghar Tiranga' campaign under the aegis of Azadi ka Amrit Mohatsav is a big hit in Jammu and Kashmir with a large number of people joining the celebrations to mark the 75 years of India's Independence.

The common citizens, politicians and soldiers are jointly campaigning to show patriotism toward the country.

In Kupwara, the councillor of Ward 4 Lateef Ahmad hoisted the National Flag at his residence to mark the celebrations.

People in the Kashmir Valley are willingly and enthusiastically hoisting flags at their buildings - be it homes, hotels or restaurants.

The Tricolour is also flying high in many public places like Lal Chowk in Srinagar and Kokila Chowk in Kishtwar.

In Pulwama, the Har Ghar Tiranga campaign has gained momentum as students, besides taking active part in essay, painting and singing competitions, are also participating in Tiranga rallies in all educational institutions in the district.

Under the Har Ghar Tiranga Abhiyan, people of Anantnag district have also started hoisting tricolor on rooftops of their houses.

"The locals are very happy and are in a positive mood for this campaign", said a local resident.

The Border Security Force, Central Reserve Police Force and the Army also joined the campaign by hoisting the National flag at their posts and office buildings.

In a tweet, BSF Kashmir said, "Participation of @BSF_Kashmir in HarGharTiranga campaign with the celebration of the 75th year of independence for a commitment to nation-building".

'Har Ghar Tiranga' is a campaign under the aegis of Azadi Ka Amrit Mahotsav to encourage people to bring the Tiranga home and to hoist it to mark the 75th year of India's independence.

Azadi Ka Amrit Mahotsav is an initiative of the Government of India to celebrate and commemorate 75 years of independence and the glorious history of its people, culture and achievements.

PM Modi on Sunday called upon all citizens to turn the 'Har Ghar Tiranga' campaign into a mass movement by hoisting or displaying the national flag at their homes and using the 'Tiranga' as a display picture on their social media accounts between August 2 and August 15 to commemorate the 75th anniversary of India's Independence.""Under the Azadi Ka Amrit Mahotsav, from the 13th to the 15th of August, a special movement - 'Har Ghar Tiranga' is being organized. Let us further this movement by hoisting the National Flag at our homes," said Prime Minister Narendra Modi on Sunday while addressing the monthly radio programme 'Mann Ki Baat'. (ANI)