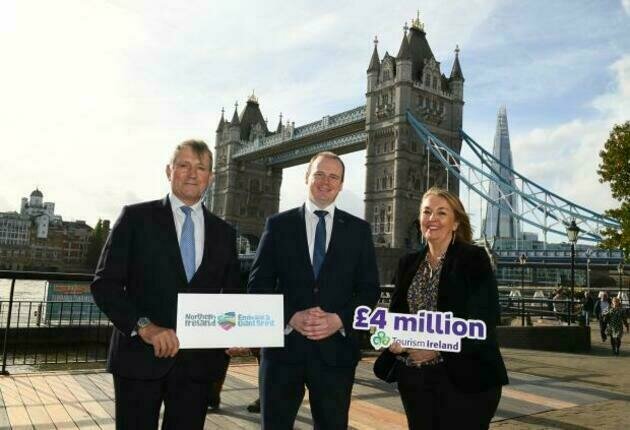 Economy Minister Gordon Lyons today highlighted how an additional Pound 4million will be spent by Tourism Ireland to implement a multi-media promotional campaign across Great Britain to promote short breaks and holidays in Northern Ireland.

The campaign is a result of funding recently announced by the Minister to help Northern Ireland's tourism industry rebuild and expand post pandemic.

The Minister today met Tourism Ireland officials in London to hear more about how the campaign will be rolled out across the GB market. Speaking afterwards, he said:

"We are beginning to see the shoots of recovery within the tourism industry and trade statistics are once again positive. It heartens me to see how the determination and resilience of Northern Ireland's tourism industry, post pandemic, is starting to pay off. Today's insight into how Tourism Ireland will roll out its Pound 4million promotional campaign in spring 2023 encouraging GB tourists to holiday in Northern Ireland will only strengthen the industry's recovery.

"This multi-media campaign, set to target millions of potential travellers across GB via streaming services, outdoor, digital, and social media advertising, will showcase all that Northern Ireland has to offer. Our unique landscape allows travellers to experience scenic, beachside, mountainous and city attractions all in a day, which makes Northern Ireland an ideal short stay destination."

"The tourism industry remains one of the largest employers in Northern Ireland, employing almost 1 in 10 of the working population and 70% of those jobs are outside of Belfast. Targeted tourism campaigns like this are paramount in helping tourism businesses and attractions generate revenue that keeps thousands of people in secure employment. I remain committed to creating a stable and prosperous economy and tourism has a central role to play in developing my Department's 10X Economic Vision, placing Northern Ireland as one of the small elite economies in the world."

"We are excited to be planning a new Pound 4million campaign to promote Northern Ireland in GB next spring. The campaign will reach millions of people - highlighting our spectacular scenery, great cities and the many things to see and do right around Northern Ireland.

"As we continue to rebuild our tourism business from the all-important GB market, our aim will be to remind prospective visitors that Northern Ireland is the perfect destination for a short break or holiday. Tourism Ireland will be pulling out all the stops to drive as much business as possible to Northern Ireland in the new year and beyond."