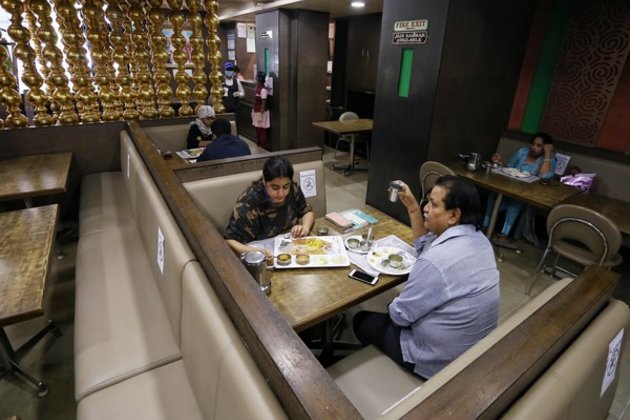 New Delhi [India], November 24 (ANI): Two hundred establishments including restaurants and eateries across the Capital have been granted licenses to enable them to undertake open-air dining in terraces and open spaces attached to them, according to Municipal Corporation of Delhi.

Of the licenses granted so far, 155 are for open-space dining and the remaining 45 are for terrace dining, added the statement by MCD.

"In less than a weeks time, when the Municipal Corporation of Delhi allowed applications by Restaurants and Eateries to enable them to undertake Open Air Dining in terraces and open spaces attached to them, 200 establishments across the Capital have been granted licenses," the statement read.

Lieutenant Governor, V.K. Saxena has constituted a Committee of senior officials of the concerned departments/agencies to ease and facilitate the licensing requirements of Restaurants, Eating Houses, and Hotels on October 31, 2022, with an aim of providing an overall fillip to the Hospitality Sector, by paving the way forward for Late Night Dining, Alfresco Eateries and Dining in open air and terraces. The Committee submitted its report in 15 days, whereafter the MCD started inviting applications for open-air dining.The L-G, who has ever since taken over, insisted upon promoting moves that would provide a boost to economic activity, employment generation, and the 'Night Time Economy. He held many meetings over the last month with officials of Delhi Police, Local Bodies, and the Environment Department amongst others, to ensure that an enabling regimen is put into place for the Hotel / Restaurant/ Hospitality Industry.

His stress has been on rationalizing licensing requirements, easing prohibitive regulations and processes, ensuring a faceless and online interface between regulators and entrepreneurs to mitigate harassment and corruption, and ensuring security through proper laworder.Up till now, Hospitality Establishments / Entrepreneurs, especially those from the small and medium segments, in the City were subjected to registration/licensing and inspecting processes by Delhi Police, Local Bodies (MCDNDMC), the Fire Department, and the DPCC. These processes and requirements were often found to be outdated, unnecessarily restrictive, coercive, and discretionary. They often led to complaints of harassment and corruption as well, resulting in the fact that, unlike other Global and Indian Cities, Delhi's Hospitality Sector has yet not achieved its full potential.It is excepted that the changes and amendments brought about, vide the report of this committee, will not only come as big relief to the pandemic marred Hospitality Industry, but more importantly, also provide a major boost to the 'Night Time Economy, thereby generating greater employment and ensuring Economic Growth. (ANI)