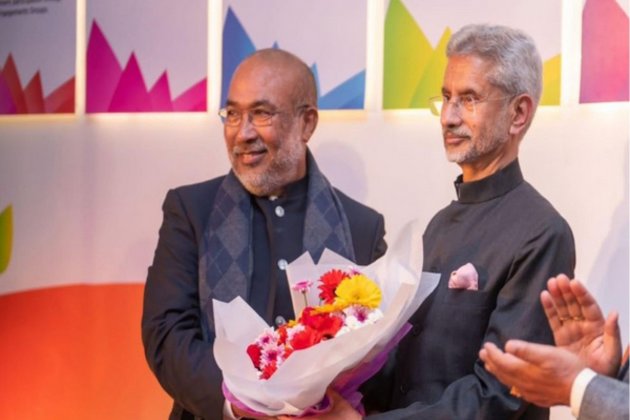 They also visited the G20 India pavilion along with Manipur Chief Minister N Biren Singh. Manipur is one of the many states where functions would be organised to celebrate India's G20 presidency at the start of next month.Sangai is Manipur's biggest tourism promotion festival, celebrated across 13 different venues.

On Saturday evening, Jaishankar attended a cultural evening session on the sidelines of the Sangai festival with Manipur CM and MoS RK Ranjan Singh at the Bhagyachandra Open Air Theatre in Imphal's Hafta Kangjeibung.

"Pleasure to attend the Sangai Festival that brings together the land of jewels, Manipur. Thank CM @NBirenSingh for his gracious hospitality. Wonderful to witness the fabulous exposition of Manipur's heritagetraditions in the performances," Jaishankar tweeted.

The External Affairs Minister also interacted with school students at the inauguration of a photo booth at the G20 Pavilion. Seeing the excitement and energy among visitors to the pavilion, he said, "India's Presidency will truly be a people's G20 for the whole nation".

The Manipur CM tweeted, "Delighted to attend the inauguration of G-20 stall by Hon'ble Union Minister, Ministry of External Affairs, Shri @DrSJaishankar Ji at Hafta Kangjeibung today. As India assumes the G-20 presidency on December 1, preparations are underway to host G-20 meetings in Manipur as well."Singh, had earlier welcomed the hosting of G20 meetings in Manipur, saying that the G20 pavilion at the Sangai Festival would provide an opportunity for all visitors to learn about the importance of India's G20 Presidency while also providing a boost to the tourism of Manipur.

Jaishankar, thanked him for his 'gracious hospitality' while praising the "fabulous exposition of Manipur's heritagetraditions in the performances at the festival".

Jaishankar visited the Loktak Lake of Manipur and the Japanese War Memorial in Imphal on Sunday.