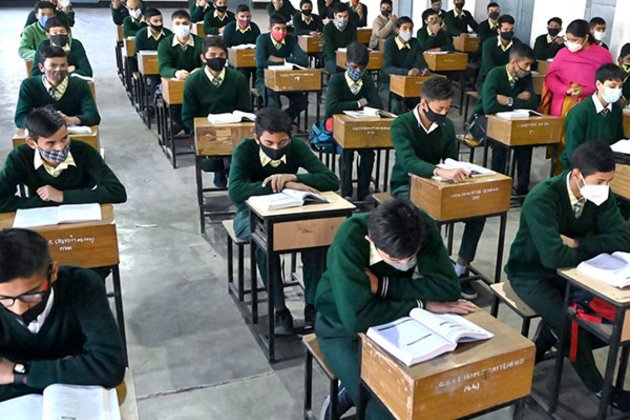 Baramulla (Jammu and Kashmir) [India], November 29 (ANI): Amid the reports of terrorism and infiltration along the Line of Control (LOC), new school buildings being constructed near the 'Zero Line' offers hope for a better future for children who want to study and succeed in life.

The town of Uri has been popular for its principal location but recently it is gaining traction for a revolutionary project underway - a new school near the 'Zero Line'.

As per the reports, after an earthquake in 2005, which took many lives and paralyzed the region, there has been no beacon of hope in the region. Situated at the LOC, the residents have never led a stable life. Most have to go to far-off towns to be able to procure two square meals a day.

Since the damage in 2005, a makeshift school was in operation at the mercy of the political environment and geographical climate for 17 years. The Border Area Development Plan (BADP) under Smridhi Seema Yojana is rebuilding the school, cementing the future of Jammu and Kashmir.

The Chautali School is situated at zero line across the fence. The original building has been demolished and a new one is being raised at the cost of Rs 50 lakh. Two new school buildings Sahoora and Lalmer (border areas) will also be constructed at the cost of Rs 25 lakhs each, the report stated.

The schools will have state-of-art infrastructure and will house all classes from kindergarten to 12th grade. Atal tinkering laboratories will also be introduced to infuse scientific temper among the students.

The District Administration Baramulla has promised 18 mini-DIETs in the district for capacity building (training) of teachers, 115 ICT laboratories in government schools, and Kindergarten classes as well.

Between October 27 to November 3, nearly 14,000 dropouts rejoined their schools marking the conclusion of the fourth phase of the Back-to-Village (B2V) program in Jammu and Kashmir. This is a monumental achievement of the administration.

The program has been a stepping stone to success for 21,329 proud entrepreneurs. 277 cooperative societies were also registered in fields such as transport, health, horticulture, beekeeping, poultry, etc.

The aim of education as per prominent scholars and philosophers is to bring out the hidden talent or nurture one from childhood. It is to hone the potential of a person for the greater good in society. Keeping these aspects in mind the NEP 2020 has stressed capacity building and pedagogical skill upgradation of teachers working at the preprimary level.

For this purpose, the Directorate of the Distance Education University of Kashmir is offering a one-year model pre-primary teacher training program (DPPTT) drawn on the framework of this policy. Untrained primary school teachers will have to compulsorily enroll for Diploma in a preprimary teacher training program. By starting at the bottom can we hope to have a smoother journey to the top.

Uri is finally peddling in the direction of development. The Central government has sanctioned four-laning of the Srinagar-Uri section of the Highway with a budget of Rs 823.45 crores. This project will end all transport woes for the border belt. The residents are shocked by the changing geography of the town.

In the last seven decades, the residents faced life-threatening difficulties daily due to the rubble and slippery slopes in the area. Today a solid network of roads is taking shape.

The Army's northern commander Lieutenant General Upendra Dwivedi showed confidence in the operational readiness of the forces and the strong anti-infiltration grid along the LoC while taking stock of the situation on the 26th of November.

The Uri-Poonch Road, also known as the Aliabad Road, which was permanently closed since 1965 due to security reasons has now reopened to connect Uri with the Jammu division, thus reducing the travel time.

Uri was directed by a feudal setup up until 1972. And even after having democratically elected representatives, its socioeconomic condition remained dilapidated thanks to favouritism politics. But since Lieutenant Governor Manoj Sinha took over three years ago, Uri is sprinting towards development.

Even in peak militancy, from 1989 to 2003 Uri's Hindu and Sikh minority population did not migrate because they enjoy complete communal and social harmony with the Muslim majority. Uri also has the potential for religious tourism.

Explorers are keen on visiting the ancient monuments of Pandavas' time, the Datta Mandir in Rajarwani and the Pandav Temple in Boniar.

Gurudwara Chati Padshai in the village Peran Pella is a revered Sikh shrine. The shrine of Hazarat Pir Gaffor Shah Sahib, and the zariats of Pir Masoom Shah Gazi and Hazarat Baba Farid also attract hundreds of people throughout the year.

Known best for producing 90 per cent of India's walnuts, Uri hosts the biggest assembly of walnut traders each year at Lagama Mandi. Now that Naya Kashmir is rewriting the history of the region, more tourists and businessmen have started visiting this historical town of Baramulla, once known as the gateway to Kashmir. (ANI)